Carlo uses smoke to calm the bees before trying to manage a bee hive.

To understand honey, it is imperative that you also understand the honey bee, for without these miraculous creatures, life on our earth would be vastly different. Without bees, agriculture as we know it would be impossible!

Bees are the most important pollinating insects, and some create honey from the nectar they collect. Honey has many medicinal used, and is the only food that contains all the substances necessary to sustain human life.

Here are a few amazing facts about honey bees that is sure to pique your curiosity about these amazing insects:

Queen Bee   There is only one queen per hive of up to 70,000 bees. The queen is the only bee with fully developed ovaries. A queen bee can live for 3-5 years. The queen mates only once with several male (drone) bees, and will remain fertile for life. She lays up to 2000 eggs per day. Fertilized eggs become female (worker bees) and unfertilized eggs become male (drone bees). When she dies or becomes unproductive, the other bees will “make” a new queen by selecting a young larva and feeding it a diet of “royal jelly”. For queen bees, it takes 16 days from egg to emergence.

Worker Bee   All worker bees are female, but they are not able to reproduce. Worker bees live for 4-9 months during the winter season, but only 6 weeks during the busy summer months (they literally work themselves to death). Nearly all of the bees in a hive are worker bees. A hive consists of 20,000 – 30,000 bees in the winter, and over 60,000 – 80,000 bees in the summer. The worker bees sequentially take on a series of specific chores during their lifetime: housekeeper; nursemaid; construction worker; grocer; undertaker; guard; and finally, after 21 days they become a forager collecting pollen and nectar. For worker bees, it takes 21 days from egg to emergence. The worker bee has a barbed stinger that results in her death following stinging, therefor, she can only sting once.

Drone Bee  These male bees are kept on standby during the summer for mating with a virgin queen. Because the drone has a barbed sex organ, mating is followed by death of the drone. There are only 300-3000 drone in a hive. The drone does not have a stinger. Because they are of no use in the winter, drones are expelled from the hive in the autumn.

Why Do Honey Bees Swarm?

Typically, honey bee swarms occur when a hive becomes overcrowded. The colony  forms a new queen, and the old queen flies away, taking part of the colony with  her. The swarm lands on a branch or other object and waits until scout bees find  a new nesting site such as a hollow tree.  Then the swarm moves to the new  location to begin another colony.

When Do Honey Bees Swarm?

Honey bee swarms usually occur during spring and early summer when bee  populations increase rapidly. If swarms occur later in the year, bees may not  survive the winter if they don’t quickly find a suitable  nest

Please Call if you are sure you have a Honeybee swarm. This is what a swarm looks like. I may bee-able to come and get them within a reasonable distance of Sterling Heights, MI for a fee if time and weather permits. The HoneyBee is protected, PLEASE do not Kill them! 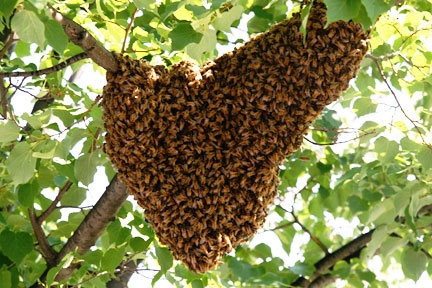